We set off for the hotel at 7.30am in order to make sure that we were at the Mount of the Beatitudes in time for the Eucharist which was due at 8am.  We were so early that we had to wait patiently in our coaches in order for the gate to open and let us in.  The man eventually arrived with his basket for the entrance fees and we were able to go into the compound. 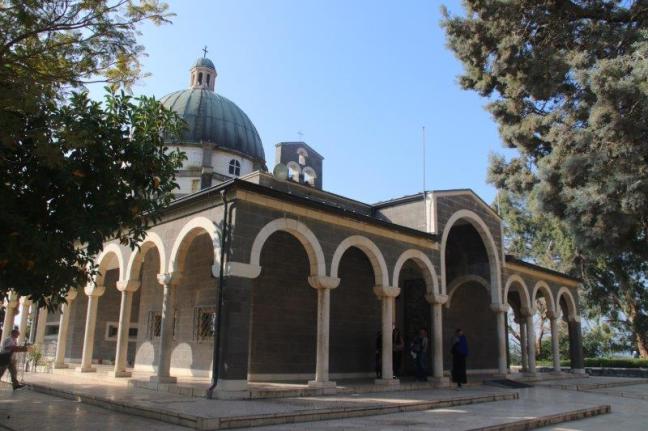 Our Pilgrims has time to look around the surprisingly small interior of this seemingly huge church before heading down to nearer the Lake for our Eucharist.  It was hard for us to credit that we were in the sun celebrating the Eucharist at 08.30 by the Lake knowing that it was freezing cold at home.  It somehow – and rather naughtily – made it so much more special.  As we gathered for the Eucharist we sang and I was struck again by the clarity and sincerity of the groups singing.  I am sure we always mean what we sing but have found myself reflecting that it seems to me that others, just like I do, feel a strength of emotion and a kind of firmness singing here.  The words of the hymn and the prayers which are often implicit in them somehow mean so much more here in the place where Jesus lived out his life and ministry.

I love the grounds here with the outdoor mosaic of the loaves and fishes and their water fountain.  I was amused as ever to see the juxtaposition of two signs together which always make me smile.   I hope that they make you smile too – I fear that the irony is lost on the Franciscans who look after this site: or might it be deliberate? 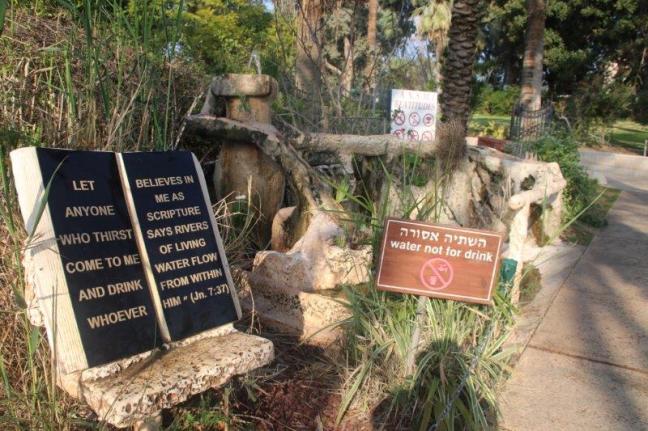 Bishop Christopher presided at the Eucharist and in his address he spoke of how wonderful it was to start this new day at Lake Galilee.  He reminded us that St Jerome said that there is a fifth gospel: that of coming to see the land for ourselves. He reminded us that we are living this now. We should not keep these blessings for ourselves but as we see the loving mercy of God at work in our world we need to open our hearts so that people see where things come from: that they come from God.  He spoke of the beatitudes reminding us that even at the worst moments of loss of whatever kind we can know that there is a way through grief even through the worst because Jesus says blessed are those who mourn.  He said that something mattered more for Jesus than anything else and that is when our hearts harden and turn to stone we must be open to God, especially here in this special place and pray for our journey our pilgrimage through life to show the attitudes of the beatitudes and to share those blessing with all. 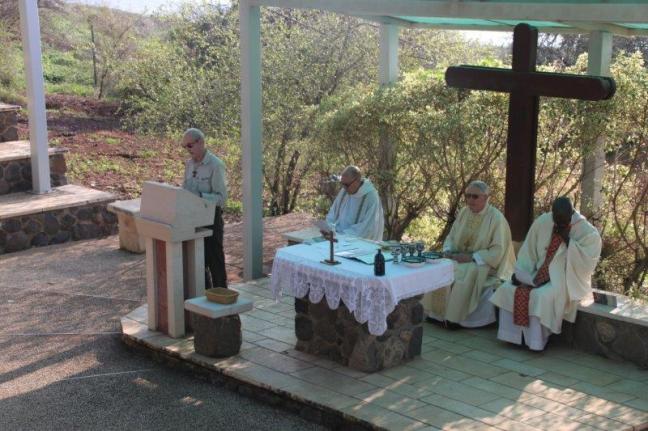 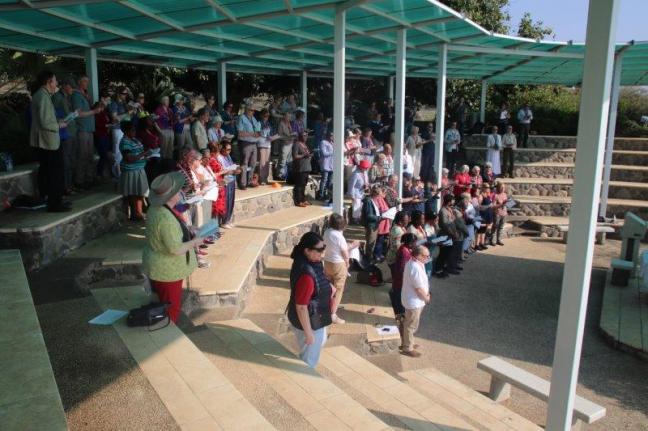 I know from speaking to many of our Pilgrims, as we have journeyed on today that this Eucharist in such a special place spoke to many of them very profoundly.  Somehow the place and the familiar words in a different place allow us to be more open to God’s spirit and what God might be saying to us.

If I am absolutely honest I always find that I get Tabgha and the Church of the Multiplication and Mensa Christi confused in my head.  I know which each is but because they are both in Tabgha and yet we get back on a coach to go between them it sort of leaves me confused.   I constantly hope that our Pilgrims are better geographically than I am!  At what I think of Tabgha we see the Church of the Loaves and Fishes and I rather feel that it’s name speaks for itself.   We only visit the church and do not go down to the Lakeside where it is possible to celebrate the Eucharist.   (We go down at Mensa Christi!)  The church always looks to me as if it ought to be a Crusader Church because it is beautifully plain.   It was in fact only finished in 1984 and was built by the Benedictines.  I find that I wonder a great deal whilst I am here in the Holy Land, how it is that I am regularly and usually attracted to the plain Crusader style Church whilst at the same time absolutely loving the riot of colour and illustration of the Orthodox churches. 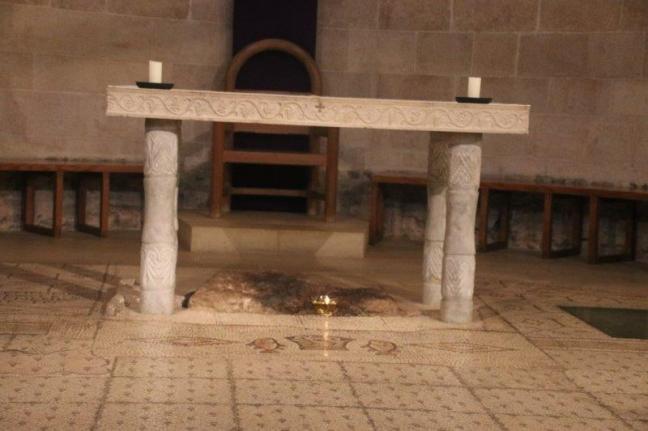 The Mosaics under the altar depict the Loaves and the fishes (pic here) and throughout the flooring of the church there are wonderful mosaics that stir me as I find the intricacy of them amazing.   Today it was pretty crowded.   I gather that February is becoming a favourite pilgrimage month!   After some time spent in the church during which we heard the story of the loaves and fishes and prayed we moved back through the courtyard to the buses.

The courtyard at the church of the Multiplication had been burned quite badly just before we had visited on the Diocesan Pilgrimage two years ago and I have photographs of the scarred and burnt wood and walls. It has been lovingly rebuilt.  It looks to me just how I remember it went I first saw it five or so years ago now and it is not easy to tell it has been damaged.    That is really wonderful in one way but I could not help but wonder whether somewhere – quite visibly and obviously – there ought not to be a record of the fire which is believed to have been deliberately started by those objecting to a Christian presence in the Holy Land.   Surely it is important to keep such acts in people’s memory in order to try to avoid a repetition of what happened?  It is difficult to think about what would have happened had the fire not been detected for I am sure we would have lost a beautiful church.

The sites which we saw first thing this morning are all quite close together and it is really hard to judge whether it is better to go back on the coach or make the short walk between them.  We were soon at Mensa Christi (the Table of Christ) which is also known as Peter’s Primacy.  We have often celebrated the Eucharist in the open air here on our previous Pilgrimages so for those of us who were returning it was a little odd to go there having already received the bread and wine at the Mount of the Beatitudes.  Here we find a church built by the lakeside to commemorate Jesus’ resurrection appearance to the disciples.  There is a tradition which says that the rock over which the church is built is the one upon which Jesus prepared the breakfast at the lakeside after the disciples had been fishing all night and caught nothing. 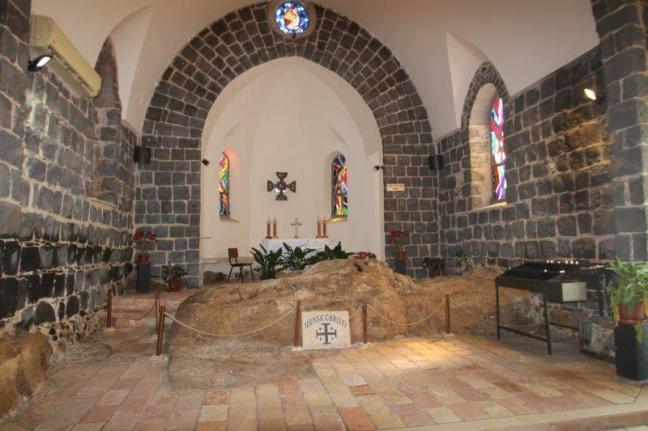 This place is also known as Peter’s Primacy as it is here that Jesus commissioned Peter using the familiar words from the Gospel story: ‘feed my sheep’.  Bishop Christopher described this as the ultimate example of Jesus’ willingness to forgive all we do wrong following the events that we had remembered at the church of St Peter of Gallicantu (which seemed to me to be about a month ago not just a few days) where Peter denied being with Jesus. 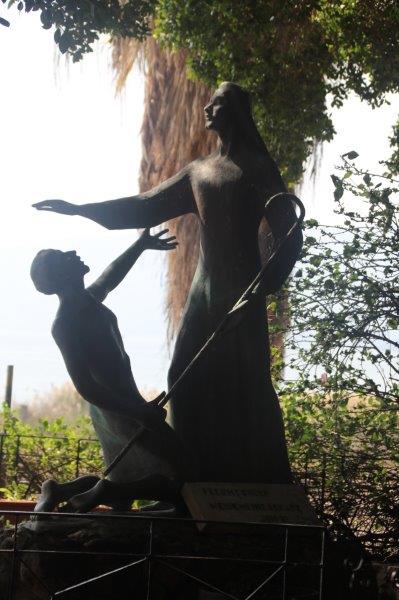 No visit to Mensa Christi is complete without a paddle in the Lake! 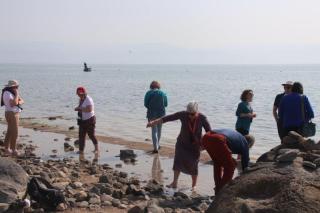 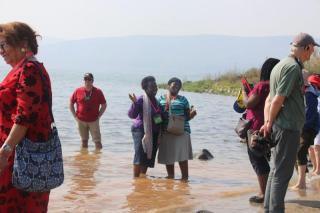 After Mensa Christi we were back on the coach for the slightly longer journey to Capernaum.  Here we are at Jesus’ Lakeside base for much of his ministry.   This is where Peter’s house was and a spaceship like church has been built over the remains of that structure.   It is built in such a way as not to disturb the ruins.  From the outside, I have to say it is an odd looking structure but inside it is beautiful and light and the weird outside shape somehow works.  In the centre of the church there is a view down into what would have been the house – it is odd to be able to see this both from inside and outside the church. 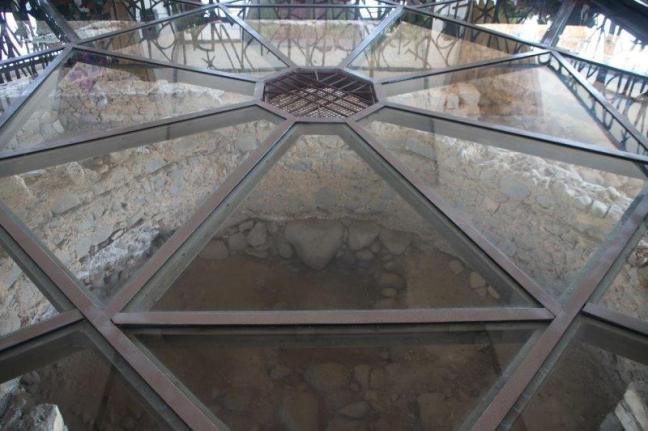 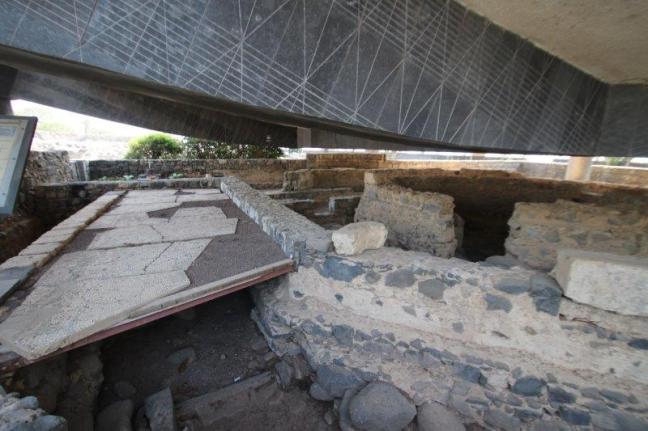 There is a statue of Peter in the grounds and people like to sit on the little bench in front of it and have their picture taken.

Here too are the remains of the Synagogue and ruins of typical houses.  It is an evocative site which brings to mind the fact that Jesus lived and worked in this area for much of his ministry and it is from here that his message began to spread.  But it also always reminds me that Jesus actually lived somewhere or at least stayed with friends.  That he need to eat as sleep much as we do and for me his humanity is always very real on this site. 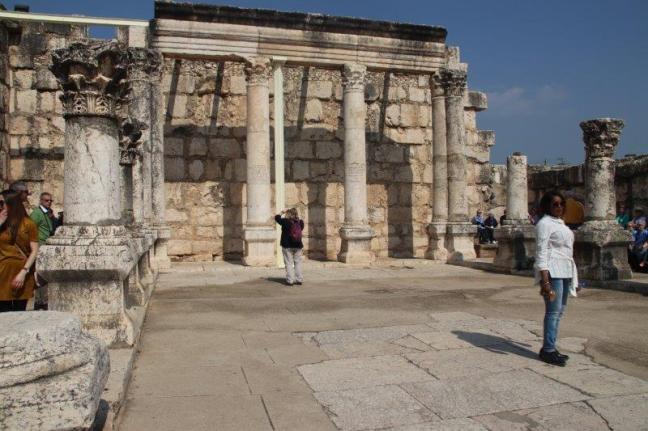 On the way into Capernaum there is a statue which I have always found very beautiful.   I always stand and look at it and invariably take a photograph too.   This time I stopped on the way out and Helen, who has been taking photographs every bit as much, if not more, than me was also standing taking photos.  As she did so she said, ‘look there are stigmata on the hands and indeed there were.  As she put it, ‘sometimes we need to look at things from new angles’. 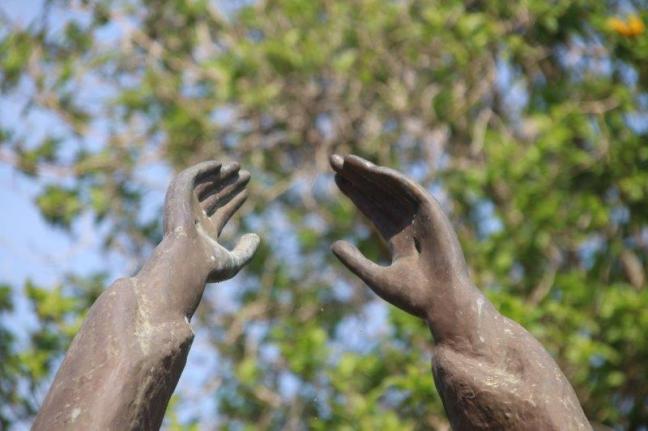 I think that that is part of what Pilgrimage is about:  looking at from things, events and stories new angles.   Seeing things for the first time or seeing them in a new light.  Hearing the Gospel stories in context, in situ.  Somehow that makes all the difference, it tips our understanding and causes us to see afresh the wonder and majesty of our God,

I love the day by the Lake; water is so special and so important in Jesus’ ministry but for now we were leaving it to have lunch and then to travel to Banias for the afternoon.