The Pilgrims were nearly all gathered as requested to board our coaches at 8am.  There was an exciting buzz as people introduced themselves to each other – by the end of the Pilgrimage some will be firm friends – and found out which parish they are from.  Today we are staying around the Jerusalem area and visiting to begin with the Mount of Olives.

As we begin our journey we use our worship booklet for the first time and it is amazing to say Psalm 122 in the sight of the walls of Jerusalem.

Pray for the peace of Jerusalem:
“May they prosper who love you.
Peace be within your walls,
and security within your towers.”

As the coach moves off and after Morning Prayer we hear from our guides about what we will be doing today and some of the significance of the places we are visiting.  Today we will be following the way of Jesus as we follow his triumphal entry into Jerusalem. 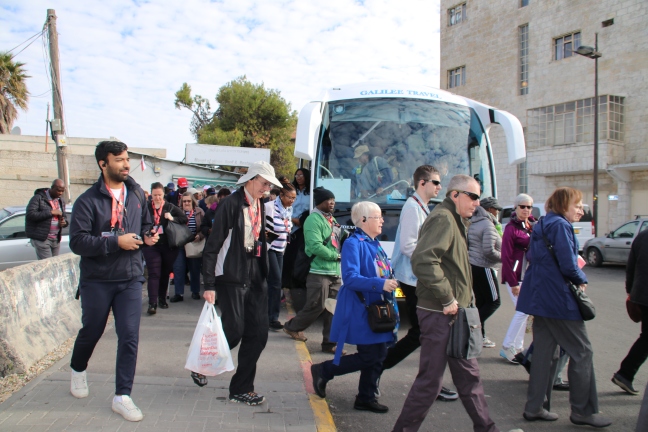 The first place that we visit was the Pater Noster Church in which the ‘Our Father’ is written on beautiful huge stones in every language imaginable.  It is a really beautiful place and people really enjoy finding the plaque in their own mother tongue and having their photograph taken in front of it.

As we went into the Pater Noster Church we were able to have an amazing view of the walled city.  It is an extraordinary way to begin our journey with a wonderful view of the city that is going to become so special to us all as it has been to many thousands before us.

This place has an interesting history.   It was at first associated with the Ascension but the chapel that commemorates this was moved further up the Mont of Olives to a more open place that seems more fitting to the Ascension.  And so the tradition is that this is the place where Jesus taught his disciples to pray: the story that we learn of in Luke chapter 11, the disciples asked him to teach them to pray as John the Baptist had taught his disciples and he taught them the Lord’s Prayer.  It really is wonderful to find it in your own language and here we have some of our Nigerian speakers with the Yoruba Lord’s Prayer and here too is the Cornish version for the two native Cornish people amongst and the two pilgrims pictured who have literally just (and by that I mean four days ago) moved to Cornwall.

Leaving the Pater Noster Church we headed off down the Mount of Olives.   Those of us who had been on the second Diocesan pilgrimage in 2016 were reminded of how different it was this time.  The Mount of Olives last time was literally like a river as it rained harder and harder as the morning went on. This time the Mount was bathed in sunshine, but was no less demanding a walk because of that.  It is steep and hard work for all of us – especially those of us who do not walk all that well.   We need to hold onto the rails and look after each other.  It somehow wasn’t strange to see a man lead a donkey around the hill or a camel turning up – there have been no riders so far this year! – it was an extraordinary sight to see a great many orthodox Jewish men, young and old but really mostly young head off down the Mount of Olives at what was almost a run.  We could not help but ask ourselves ‘where are they going?’  Some of us decided that they were going off to study but we were wrong.  As we journeyed further down the Mount of Olives the question was resolved.  They had all gathered far up on the Mount of Olives in the cemetery for a funeral.   It was an amazing sight and one which could not help but cause us to reflect that, even though we are here to see sites holy to Christians, this is still a place in which people live day to day as we do in Southwark Diocese.  It is a Holy place to the Jews too and indeed to Muslims.   One to which people come on pilgrimage regularly and in which they will have been honoured to know that they can and will be buried. 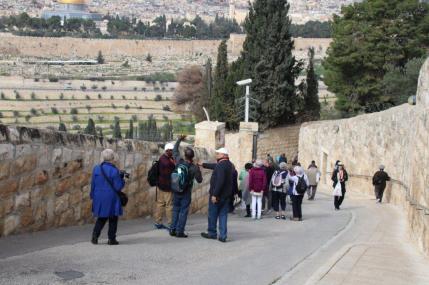 From the Pater Noster Church we arrived at Dominus Flevit, the teardrop Church built at the site upon which Jesus is supposed to have looked over Jerusalem and wept (Luke 19: 41-44). Following readings and prayers Bishop Karowei spoke and asked us to think today about what or who Jesus might have been weeping over.

The walk down the Mount of Olives continues to be very steep and the Pilgrims made their way down it slowly taking in all the views as we headed towards the Garden of Gethsemane.  All the way down it is possible to see burial grounds for the Jews, Muslim and Christians.  Each has their own special place.

(Ancient olive trees in the Garden of Gethsemane)

In the Church of All Nations (also known as the Church of the Agony), which is thought to have been built on the site of the rock at which Jesus prayed, there is an amazing depiction of the event on the wall in the chancel behind the altar. It is called the Church of All Nations most usually because so many nations apparently contributed to the cost of building it.  It was built in 1955 on Byzantine foundations. The church is so beautiful and it is wonderfully peaceful despite all the people. 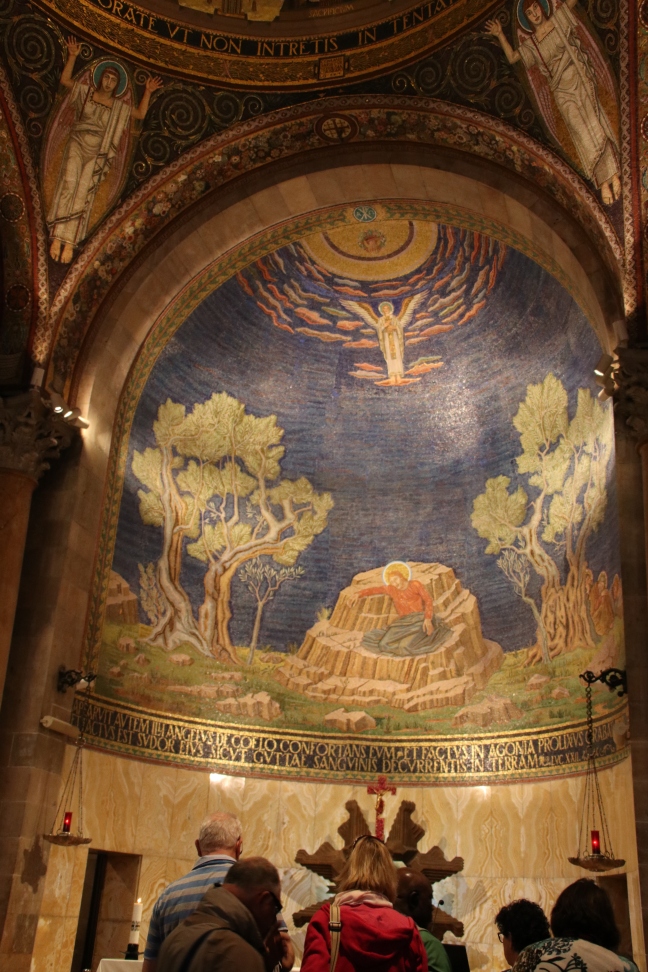 After a reading and prayer at the church of All Nations we move on to our last visit in East Jerusalem: St Peter in Gallicantu.  I confess that this is my favourite holy site, it is so evocative.  Set on Mount Zion it is the perfect place to see how set apart the Temple Mount is from the rest of Jerusalem.  The hill where the Dome of the Rock and the Al Asqa mosque are built is not easily seen to be distinct from the rest of the Old City from many angles but from the site of St Peter in Gallicantu it is clear that this most holy place is set apart.

St Peter’s is the site of the High Priest’s house and is a three layered church built on the site of the dungeon in which Jesus was believed to have been held overnight after his arrest in the Garden of Gethsemane.  Coming to St Peter’s strait after visiting the Garden of Gethsemane, where we have remembered Jesus’ arrest following his night of prayer during which the disciples were unable to stay awake, is very moving.  For here too St Peter’s betrayal is commemorated; Gallicantu means cockcrow. The Pilgrims listened to the Gospel reading in which we hear of Peter denying Jesus three times before the cock crowed twice and we were moved by the poignancy of this event. It caused me to think about the many times and in different ways in which I do not speak out for what I believe in the way that I should and made me want to once again commit myself to trying harder.

The three levels of the church are each very different with the most modern church at the top being highly decorated and peaceful, the second level allows those who cannot descend further a view of the dungeon which one can also see descend down into.   Just looking down through the floor of the chapel on the second level reminds one of how desolate the dungeon in which Jesus was imprisoned once was.  To the left of the Church one can see the steps up which Jesus would have walked as he came to the High Priest’s House.   For understandable reasons these are not accessible but it is not difficult to imagine just how hard it must have been for Jesus to make his ways slowly up these steps and to grieve once more for all he suffered.

Despite the sadness that St Peter’s evokes it is a beautiful and peaceful place with wonderful views out from Mount Zion across the surrounding area, and it is clear that the pilgrims are sad to leave but lunch beckons. 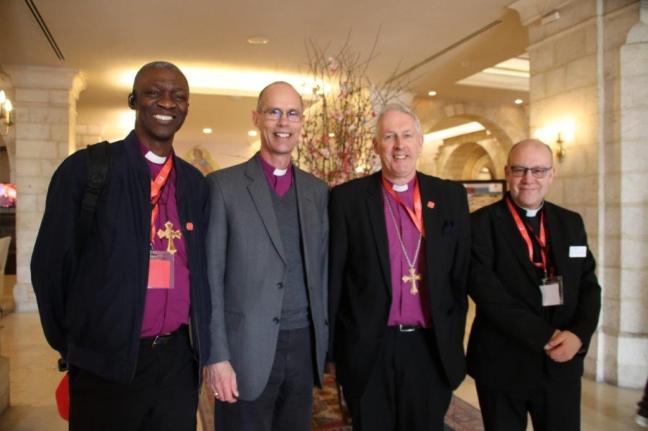 Lunch was at the Notre Dame Centre and we were delighted to be joined by Bishop Richard Cheetham, the Bishop of Kingston, who is in Jerusalem in his role as Chair of the British Regional Committee of St George’s College, Jerusalem.  Lots of our pilgrims remarked that they hoped that nothing too difficult happens before Bishop Richard returns to Southwark on Wednesday 21 as Bishop Jonathan seemed to be ‘home alone’!