The Friday of the Diocesan Pilgrimage is always a very busy time as we move from our hotel in Jerusalem to our hotel in Tiberius.  We always say that this day marks a change of pace in the Pilgrimage as we head north to the Sea of Galilee in order to visit ‘Jesus’ parish’.

As we leave the hotel we head for Neve Shalom – a village where Palestinian and Jewish people live together in an example of how it is possible to live without the barriers and division that exists elsewhere in the surrounding area.

It was set up by Fr Bruno Hassan in 1970 on land which belonged to the Latrun Monastery.  The community describes itself as ‘a model of equality, mutual respect and cooperation that challenges patterns of racism and discrimination as well a continued conflict’.  One of the residents told us of how the village came to be set up.  As the land was privately owned it was possible to build a community which tried to model what it might be possible to do as a way of seeking a ‘one state’ solution rather than a two  state one. 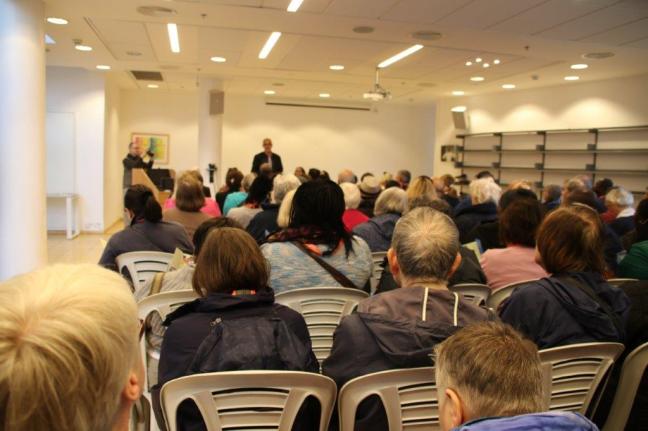 Then Samah Salaime, from the Communications and Development Office, told the Pilgrims how she came to live at the village.  She spoke of her own experience of having been brought up as a Palestinian woman in the Israeli education system and how she had felt displaced and that when she looked for kindergarten for her son she realised that she could not find the sort of place that she wanted that would help him to grow up as a rounded person.  Her partner suggested that she might look at the kindergarten at Neve Shalom where he worked at the peace institute.  She considered it; liked it and her son began at the school and she and her partner were – as is the way of the village – given a piece of land upon which to build a house.  She now has three sons and they have lived at the village for 18 years.

She spoke of the way that the village people do everything by consensus as a way of modelling that it is possible to agree together how to do things even if this is sometimes difficult.  She said that no one should believe that all the families who live together agree.  There are lots of things about which they disagree – mostly at present it would seem to me about cats and dogs(!) – but they can come to agreement to move forward.  There are now some 60 families and it will grow to 150 families.

Sadly we did not have a huge amount of time to spend at the village and were not able to see it all very well but it was clearly an impressive undertaking.  New families still arrive and we saw one who had been there just three weeks. It is not always well received by the various communities in which they live but it continues and grows and one can only hope and pray that some of the lessons learned there may one day help to bring about the peace of, not only Jerusalem, but the people and the land which are so often so divided at present.

From the village we drove to Nablus and to Jacob’s well.  The Church and the well itself are truly amazing.  One of the things that really strikes me is that unlike some of the sites in Jerusalem – where something might have happened in one of a couple of places  – we know that this is authentically the well at which Jesus asked the Samaritan women for water.  So each group went through the church and descended in to the crypt where the well can be found.   In this cave like room there are icons all over the walls and the priest who looks after the church – who has indeed more or less singlehandedly restored it to the glory that it now has – has a little icon shop too.

Both groups had the opportunity to go down into the crypt separately as it is so small and each heard the readings and prayed before they brought water up from the well.  It is extraordinary to realise how deep down the well goes and to wonder how on earth it was ever dug so many years ago.  The water that comes up in cool and clear and all those who want to have the chance to have a drink from the cups that comes with the bucket.

Up above the crypt the church is light and airy and has a huge number of frescos which always make me want to gape, they are so beautiful.  This is only the second time I have visited this church and last time on the Diocesan Pilgrimage I was so transfixed by the Church that I forgot to take many photographs.  This time I was sure that I would do better this time.  I did but I really had to keep myself to task as I found that I simply wanted to stand and wonder and pray at this place which is so much a part of the gospel story.  The Pilgrims were bowled over by the visit and just kept repeating how wonderful it is and I have to say it is one of those places that I feel could be returned to time and time again and that one would never tire of it. 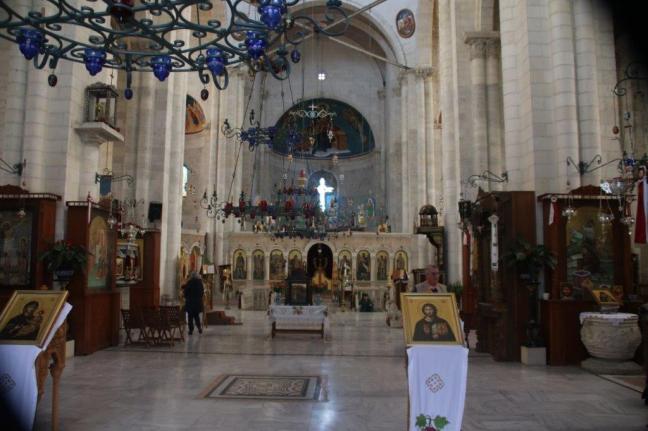 Following our visit to Jacob’s Well we got on our coaches again and headed to Sebastia for lunch.  This part of Samaria is very rarely visited which is such a shame as it is full of historical remains from Greco-Roman times and the people are warm and welcoming.  Lunch is in a restaurant that serves organic food and there is a shop there too.  We were the only party to arrive yesterday and it is clear that people avoid this place and in so doing they miss out on so much.  After our delicious lunch we went outside and some went off with out guides to walk to the amphitheatre which is part of the remains of Sebastia.

The camel was there, as it had been when we visited two years ago, but this time, although people could get on it, it did not set off on rides from people.

The rest of the day was spent in the coach as it took us further north and we arrived at the Ron Beach Hotel in the early evening.  This is a wonderful hotel and all the rooms have views of the Lake and we were urged to be up to see the sunrise over the Golan Heights.  It is extraordinary.

I didn’t make it but other Pilgrims did and one of them, Matthew Hall, took this really wonderful photograph.

We had a little time to unpack and settle and then have dinner.  The Pilgrims all enjoyed their meal and at our meeting professed themselves very happy with the hotel and their rooms.

In our meeting we reflected on the experience of the Well and the peace village before saying compline and then going off to bed before our next early start.