Following our Lord in the Way of the Cross

It was clear as we set out today that the weather was going to be kind to us.   At 7.30am, as we left the Golden Walls hotel for our day of walking around and in and through the Old City, it was already pleasantly warm for which we were grateful.   We entered the Old City via Lions’ Gate and made our way to St Anne’s Church.   This is a wonderful Crusader Church built beside the Pools of Bethseda, the site of the story of the paralysed man in John 5.  It is looked after by the French White Fathers – although the one that we have seen each time we have come on Pilgrimage is actually Irish!   (Rumour has it that Queen Victoria was offered St Anne’s Church or Cyprus and chose the latter!)

We said Morning Prayer in the Chapel at the newly constructed Visitor’s Centre.  It is very peaceful and beautiful and set in peaceful gardens.   Following the service we went and looked into the Pools of Bethseda (there is no water anymore!) and there into St Anne’s church where we were once again able to experience the wonderful acoustic of the Crusader churches – listen to the clip below of us singing ‘When I Survey The Wonderous Cross’.

One of our Pilgrims has mobility difficulties and we had brought her to St Anne’s and were able to leave her sitting in the wonderful gardens at St Anne’s with her daughter and she was able to follow the Pilgrims as they did the Stations of the Cross in the service booklet and then, after a short rest at the hotel, they were able to join us again for lunch in the Armenian restaurant.

The Stations of the Cross are an extraordinary experience for most people, whether or not they have said them before at home or on a previous Pilgrimage.   The stations today were no different.   People took turns in carrying the cross as the two coach groups moved through the stations until they were each in the square outside the Holy Sepulchre Church.

Bishop Christopher led one of the groups and Dean Andrew led the other. 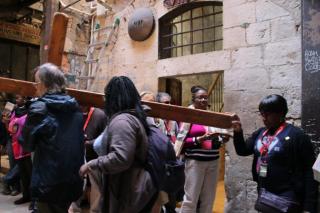 Three of our Pilgrims have written about their experiences:

Amuda Poongavanam: Coming from an Eastern Orthodox background, the Stations of the Cross was something I’ve only done with a gaggle of girls in Catholic convent school and in Southwark Cathedral as part of Holy Week. It doesn’t prepare you for the real thing. Cool sterile environments, designed to keep heat and dust out and the mind focussed on the last painful walk of the Lord. We started after morning prayer at the first station, where Pilate washed his hands. I was distracted, pondering the schism between the western and eastern churches. Not really, only wondering if this particular pilgrimage stage would make my mother spontaneously combust.

The Dean swiftly focussed our minds on the fact that this was a holy mass. We were not to be distracted from the Via Dolorosa by the other attractions, no chatting, no going off shopping or stopping to take in the sights and the smells. There were plenty of distractions. A souk full of stores selling the most wonderful coloured fabrics, spices, fragrances, foods, tapestry, souvenirs. School kids rushing past, chagrined at being delayed by another group of pesky pilgrims. Shopkeepers trying to sell one more excess baggage of trivia. The keen eyed Israeli guards observing us with rather nonchalantly held Kalashnikovs. The ten seater cars and trucks racing up at one in impossibly narrow, steep and bendy lanes. We swiftly fell into the rhythm of it, quietly aware that this was the real thing and how it was the first time it was done.

Each stage swiftly brought home the pain and vulnerability, the humiliation. Of how carrying the cross and stumbling multiple times would have felt. In front of ones family and friends. Their helpless pain adding to one’s burden of sorrow at being innocent, framed, and having humiliation, slight, torture heaped at every stage. The utter humanity of it all. The walk is short, but treacherous. Three of the group held the cross between stages. Handing it to other eager volunteers. To think, that 2000 years ago Jesus did this alone, probably starving from being in prison, not to mention overwrought, the condemnation hanging over him. With no friends, well maybe one other person to help share the burden. It brought home our own sorrow, how life’s setbacks always come when one is down and under. And sometimes there just is no way out and no one can help. We all had our emotional moments on the way, when we hit our raw nerve of relating to the pain of our beloved Saviour. The choking voices, the welling eyes, the sudden donning of sunshades.

I had an epiphany towards the end, when it hit me that sometimes tremendous distress and vulnerability is best dealt with by submitting and surrendering. If the tormentors then had a time travel machine, they would have been utterly horrified by the utter reverence and honour we treat their symbol of a condemned criminal. How widespread and proliferated Christianity now is, only because of their actions.

There is no schism between the eastern and western churches. My mother reports someone deserves a medal for making me do it. She says she would have loved to have been there and held the cross herself.

Caroline Risden, Curate at St Alfege, Greenwich: I had thought that Jesus went along a straight path, with people lining the route watching events unfold. When we retell the story at Easter, everyone is involved, everyone participates. But the Via Dolorosa is a winding road; steep and uneven in parts. The other insight I gained was that for Jesus, his family and his friends, the events would have been all-consuming, devastating and unbelievable. But Jerusalem was packed with people observing Passover. So, for many, it was just another day. I’ve realised that this walk imitates our journeys of faith – we are travelling personally and corporately. And sometimes the most profound happens amidst the most mundane.

Matthew Hall: Profound, humbling, and human, are words to describe walking the Via Dolorosa, with the profound liturgy along the way.

I bet when Jesus carried the cross people tried to sell him things, taunting him, as we do every time we sin. We are all human, and Jesus would have smelled the meat cooking in rich spices, while the crowd were baying for his blood. He would have run into traffic carrying food, albeit donkeys and not tractors as we saw. In the street guards with guns stood nonchalantly as we passed, just like the Roman centurions that Christ would have passed. 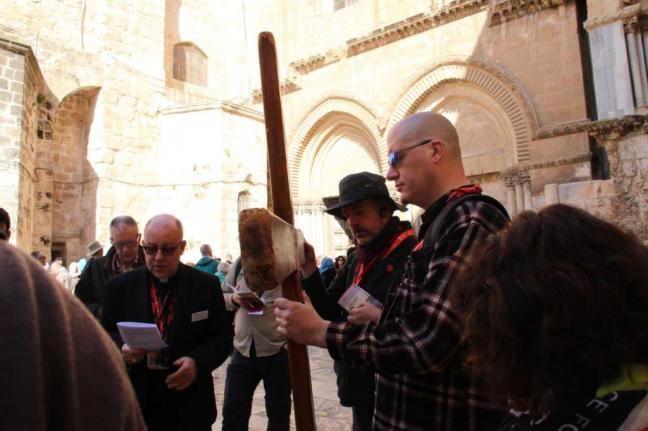 Then a mate and I took the cross and we were led outside the Holy Sepulchre Church. After Station nine, I was expecting to pass the cross onto another person, so I could spare my Anglican embarrassment of being in the spotlight. But we had to stay holding the cross until station 14, forcing me to mentally comprehend the scene before Mary, as her son died, on that day in Roman Jerusalem.

The experience was deeply humbling, and through the Eucharist that followed, points in the old city of where Christ stumbled, where he was stripped, or where the nails pierced the skin, are seared on my memory. This morning has erased my childhood images of the Easter message bringing it to a real life experience that shakes away my sanitised view of the Crucifixion.

After we had finished the Stations of the Cross the Pilgrims were able to spend some time in the Church of the Holy Sepulchre.   The Church is built over the rock of Calvary and the present church is the fourth on the site and was built by the Crusaders in the twelfth century.  It is a very complicated sort of building where different bits are looked after by different parts of the Christian Church and they seem unable to resolve things easily amongst themselves and so for centuries the key to the Church has been held by a Muslim family – it seems that the Christians cannot agree when the Church should open or close.

The Holy Sepulchre Church is very busy most of the time and so it is better to go very early in the morning and that is exactly what some of the Pilgrims will do with the Bishop and the Dean at 6am on Thursday morning. 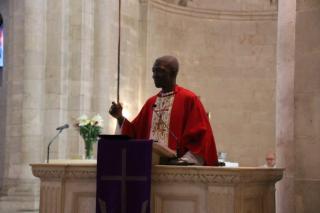 From there the Pilgrims went to the German Lutheran Church of the Holy Redeemer for a Eucharist in which we were all able to reflect upon our experiences during the morning.   Bishop Karowei preached and presided at the service.   He challenged the Pilgrims to think about what we were doing here and focused on the role of the women in the Gospel reading from Mark 16: 1-8 when they went to anoint in the tomb.   He reminded us that we are all called to live lives of dedication to God because we have been called to live for God and not for ourselves.  He urged us all not to worry about the shopping that we might need or want to do here in Jerusalem or elsewhere on our pilgrimage or to think solely about all the attractions that we might see.   Rather he said we should focus as Pilgrims together on Christ and his love for us.

The Eucharist having ended we made our way through the Old City to the Armenian Quarter where we had lunch.